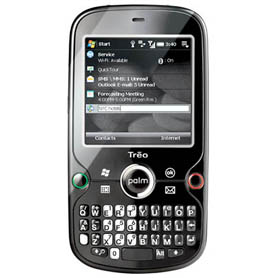 I’ve got some good news and some bad news for the citizens of Saskatchewan. While you don’t get to bask in the glory of Corner Gas anymore, the guys at SaskTel are going to treat you to a hot new smartphone from Palm. That’s the good news. The bad news is that it’s not going to be the slick new Palm Pre.

Instead, you’ll have to head back to the previous generation to see the current generation of smartphone for SaskTel. It’s the Palm Treo Pro, a a sleek upgrade to the old Palm Treo design, but it’s still a Palm Treo through and through. From what I recall, this phone was actually sourced from HTC, so the build quality should be quite good too.

I know. It’s not the Palm Pre and it’s not quite as exciting as an iPhone, but it is going to be one of the best options for SaskTel customers. As you may recall, you get a 320×320 square touchscreen display, full QWERTY keyboard, Windows Mobile 6.1, 2-megapixel camera, GPS, and Wi-Fi.

Latching onto a three-year service agreement, you can snatch the new Palm Treo Pro through Sasktel for $169. Any contract shorter than that and you can expect to pay through the nose. A two-year agreement results in a $439 asking price, a one-year bumps that to $539, and a no-term agreement (gasp) puts the Treo Pro at 739.