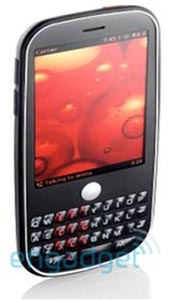 You didn’t think that Sprint would be the only cool cat to take advantage of the new Palm webOS with the Palm Pre, right? While the Pre itself does not look like it’s going to hit a GSM carrier in North America just yet, a suitable alternative could be ready very soon.

More specifically, we’re looking at the Palm Eos, which we had previously heard about as the Palm Pixie. This candybar-style smartphone will take on the same kind of webOS platform as the Pre, but it’ll have a keyboard in plain view rather than having the slide-out version that the Pre does.

There are some reports going around that the entry-level smartphone will be ready for launch through AT&T as early as next month, though an October release is more likely. That’s still in time for the Christmas shopping season.

You can expect to see a 2.6-inch multitouch display and GSM/HSPA support. The rumor is pointing toward an initial shipment of between 400,000 and 500,000 units, so AT&T shouldn’t have too much trouble dealing with demand.

Not to be left out in the cold, it seems that a CDMA/EVDO version of the Palm Eos could be ready for the world in Q1 2010 too.