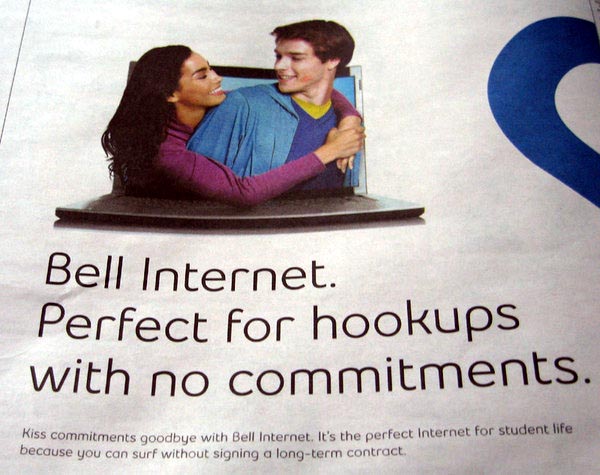 When designing a marketing campaign for your company’s products or services, you want to speak to your audience and their specific needs and desires. Bell took that philosophy a little too literally, making an ad that really speaks to the carnal desires of college students.

Bell is trying to say that you can get Internet access from them without having to deal with messy service agreements and long-term contracts. In doing this, Bell says that their Internet is “perfect for hookups with no commitments.”

Hookups, eh? Bell further completes the mental imagery of a college “hookup” by having a gal move in nice and close on an unsuspecting guy. Maybe they’re at a keg party and she’s telling him that she loves following on Twitter and she wants to follow a little closer. Or something.

If Buddy plays his cards right, he’ll score tonight with “no strings attached.” Go for it! Just make sure you have an adequate, ahem, antivirus program in place.