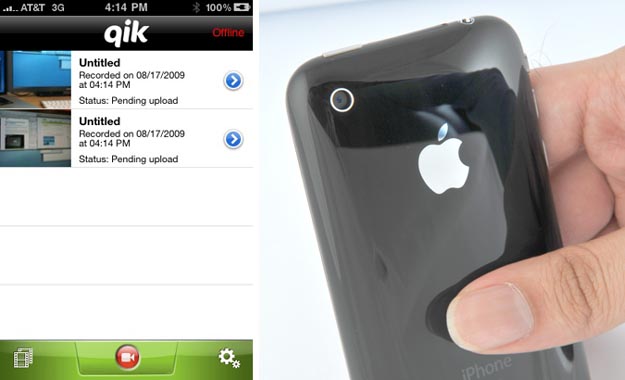 As you may already know, Qik has quickly become one of the most popular mobile video streaming services out there. The idea is that you can hook up your connected cell phone and stream video directly from your phone’s camera onto the Internet in (almost) real-time. I’ve used it on my Nokia E71 and there are apps for other platforms too.

The iPhone version has been approved for the App Store, so you would think that everything would remain intact. And you would be wrong. The iPhone Qik app will not let you do any live video streaming whatsoever. Instead, you can only upload pre-recorded videos, not unlike what you can already do with YouTube on the iPhone 3GS.

To make matters worse, you can’t use your wireless broadband (3G) connection with the Qik app either. If you want to upload videos from your iPhone, you’re restricted to just a Wi-Fi connection. That takes away a huge chunk of convenience.

The guys at Qik have submitted a revised version of the app that can take advantage of 3G networks, but Apple has yet to grant approval to this new version. Based on the response from AT&T and Apple in the past to other similar heavy-data apps, I’m not very hopeful that the 3G-friendly version will get approved.