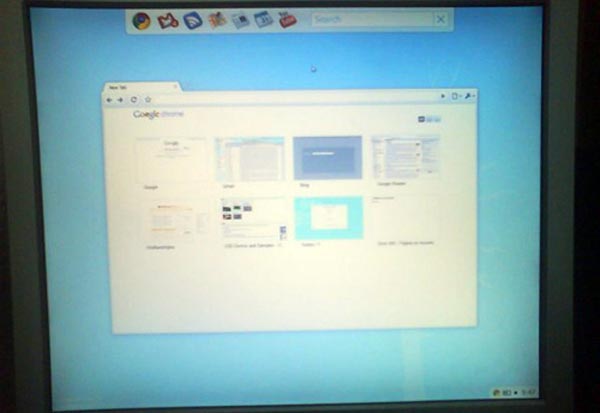 In the current netbook market, you have your choice between a Windows XP installation or some build of Linux. We’re hearing that a Google Chrome OS is in the works and what we may have here are the first live screenshots of the new platform in action.

As with any of these leaks and rumors, you’ll have to take these screenshots with more than a bucket of salt. They are by no means being confirmed by the guys at Google and they could very well be a clever PhotoShop trick by some netbook enthusiast. That said, I kind of like what I’m seeing.

Rather than going with a Windows-inspired “Start Menu” type desktop, it seems that the Chrome OS for netbooks will instead take on a dock, not unlike what you find in Mac OS X. The dock gets shoved to the top of the screen, giving you quick access to all your Google needs.

As you can see through this shot, the icons at the top are for the Chrome browser, Gmail, Google Reader, Google Maps, YouTube, Google Calendar, and so on. It’s simple, clean, and straightforward.

However, there are reasons to believe that this is a fake. There’s word that the Chrome OS will have a new windowing system wherein there are no windows; everything runs full-screen all the time. It’s also quite odd that these leaked shots are of Chrome OS running on a 4:3 CRT. Why would they do use a CRT?