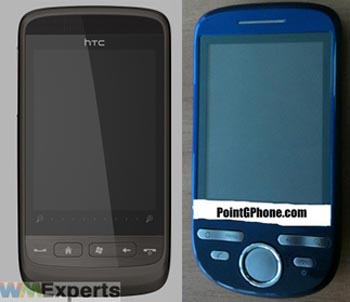 Although it may seem like HTC is at the top of its game these days, its revenue figures don’t really back up that claim. The company is hoping to turn things around with some new smartphones and we’ve got a couple of them here that are reportedly coming down the chute. Might I interest you in the HTC Mega or the HTC Click?

As with so many other HTC codenames that preceded them, these names probably won’t stick around long enough for a retail release but the phones should be ready for a wide launch in late Q3 or early Q4 of this year. As you can quite plainly see, both the Mega and the Click are touchscreen phones.

For the HTC Mega, on the left, you get Windows Mobile 6.5, accompanied with a 2.8″ QVGA touchscreen, 3 megapixel camera, GPS, and a 528MHz processor. These specs place it somewhere between the lower and middle range of the smartphone market.

On the right, you have the HTC Click. The specs should be similar to the HTC Mega, except the Windows Mobile treatment has been swapped out for some love from Google Android. The HTC Magic (T-Mobile myTouch 3G) isn’t the only touchy ‘droid in town.

Both of these phones are expected to be around $300 at time of launch later this year.