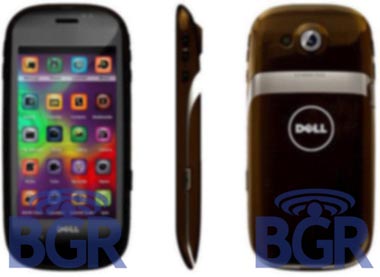 We’ve been hearing about the very real possibility of a Dell smartphone powered by Google Android for a while, but now we’re starting to see some real hard evidence that this phone is indeed in the works and it could be ready for primetime sooner rather than later.

The Dell smartphone was originally codenamed as Benzine, but it seems that the popular computer-maker is going to lean toward calling it the Dell Mini 3i, following in the same naming scheme that we see with their netbooks. I guess the “3” in its name indicates a 3-inch screen.

Just as HTC is doing with its Sense UI, Dell is also creating a custom build of the Googld Android operating system in some way. How far they go in adjusting the smartphone platform remains to be seen, but the home screen, as shown here, reminds me a little of a very colorful iPhone.

The overall form factor is somewhat reminiscent of the Palm Centro, except the full QWERTY keyboard and small landscape touchscreen have been replaced with one larger 640×360 LCD touchscreen. This falls in line with what’s hip and cool these days.

You’ll notice the lack of 3G and Wi-Fi. Well, this first foray is apparently destined for China, so future iterations may introduce these otherwise standard features.