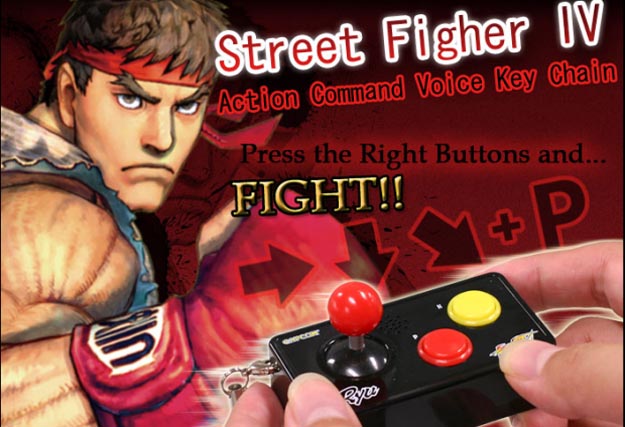 It’s no secret that I’m a pretty big fan of fighting games and I’ve been playing quite a bit of Street Fighter IV. I have a t-shirt to express my enthusiasm already, but this new cell phone charm from Japan could be going a little too far.

Many cell phone users, particularly from Asia, seem to have a thing for having cell phone charms dangle from their handsets, but most of these are of a manageable size. Such does not appear to be the case with this Hadouken-inspired unit, because it’s a mini arcade stick. And it’s functional.

You won’t be able to plug in this Street Fighter IV Real Voice mini joystick into your Xbox 360 for some Street Fighter action, but you can make it sound like you are. If you pick up the Ryu edition, for instance, and complete the fireball motion on this joystick, it’ll say, “Hadouken.” Do the uppercut and it’ll say, “Shoryuken.” Not even kidding.

In addition to the Ryu edition as shown, which only has one punch and one kick button but it has an eight-way joystick, you can also choose from versions featuring Ken, Dhalsim, and Chun-Li. Yup, you can pull off Yoga Flames and Spinning Bird Kicks too.

Yes, it’s quite ridiculous, but somehow, the Street Fighter IV Real Voice is strangely awesome at the same time. Pre-order one for $13.10 plus shipping. They launch next month.