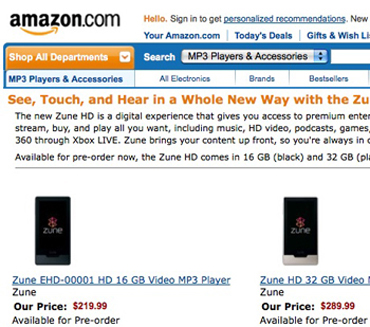 Yesterday, there was a leak from Best Buy that pointed toward the pricing scheme for the upcoming Zune HD portable media player. We took that report with a grain of salt, since it may or may not be 100% accurate. Today, however, those numbers have been duplicated by Amazon, leading us to believe that these prices could be the real deal.

It’s hard to say how well the touchscreen-equipped Zune HD will be able to compete against the hugely popular Apple iPod touch, but the pricing for the products is quite a bit less than the Cupertino-sourced equivalent.

According to both the Amazon and Best Buy leaks, the 16GB Zune HD will be sold for $219.99 when it launches later this year. It’s up for pre-order on Amazon for that price. The larger 32GB model is being listed for $289.99 and it is also available for pre-order.

Based on this information, it sounds like Microsoft has the upper hand, but you also have to realize that Apple may be updating its iPod touch line this fall (possibly to include a camera). The price advantage may disappear at that point.