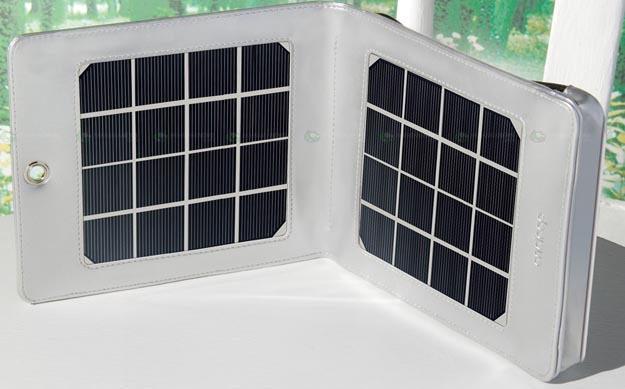 I’ve stated in the past that my greatest environmental sin is that I probably consume a fair bit of electricity. I like my gadgets and I love my technology. Between my cell phone, MP3 player, television, Xbox, and countless other items, I can’t live without power. Sanyo understands this addiction and is offering a way for gadget geeks to go green.

This isn’t exactly the first of its kind, but that doesn’t make it any less valuable. The Eneloop Portable Solar is a fold-up solar panel that can be used to charge a variety of portable devices. Simply plug in your iPod, smartphone, Nintendo DS, or whatever else and it’ll give you a quick boost.

There are two versions of this that will be made available. One version comes with just a single solar panel, measuring about the same size as an Amazon Kindle, and it’s suitable for smaller items or for people who have more time to burn. The other version opens like a book to reveal a pair of solar panels.

From what I hear, these classy yet planet-friendly devices will retail in Japan in about the $100 price range. Since they are solar panels, I wouldn’t expect them to be the fastest way to charge up your devices, but you could just leave them on the windowsill until you need them.