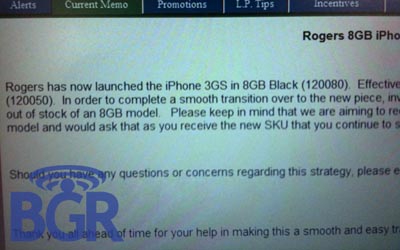 Maybe you’re in love with the newer Apple iPhone 3GS and all the added horsepower and features that it offers, but you’re not quite in love with the higher price point. You don’t want to opt for the 8GB iPhone 3G, because it’s just not the same. Rogers apparently feels your pain, because there’s word that the Canadian carrier is loading up with an 8GB version of the iPhone 3GS.

This comes from a leaked Rogers document that is pointing toward the imminent launch of the iPhone 3GS in 8GB Black (120080). Presumably, the 8GB iPhone 3GS will still get all the extra speed and features as its higher capacity cousins, but at a more affordable price point.

In this way, it sounds like the upcoming 8GB iPhone 3GS will take over the $99 (with contract) price point that is currently occupied by the 8GB iPhone 3G. How will Rogers entice you to buy the latter? Could we be looking at a $49 iPhone 3G? Maybe even a free-with-contract iPhone?