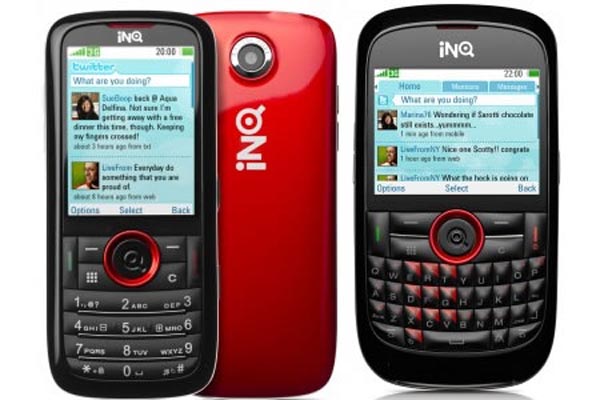 Personally, I’d much prefer to have a real smartphone, like something powered by BlackBerry or Android, but some people are more interested in getting a so-called feature phone instead. At the same time, they want some elements of the smartphone appeal. INQ is approaching this niche market with two brand new offerings that may look like smartphones, but they’re not.

The phone on the left is the INQ Mini. You get a standard numeric keypad, so all your texting will come by way of T9 predictive text. The black and red color scheme is bold, yet stylish, and it comes pre-installed with a slew of applications. Featured front and center, for instance, is the Twitter client. Tweet to your heart’s delight. (Don’t forget to follow Mobilemag and follow me while you’re at it.)

The phone on the right is the INQ Chat and it almost gives you the sense that it’s trying to be a BlackBerry. You get a larger landscape-oriented display, a full QWERTY keyboard, and the built-in Twitter app for mobile tweeting. As I understand it, both phones will also come with a range of tools for media, photos, games, messages, and more.

The good news is that INQ plans on launching both the INQ Mini and the INQ Chat in the fourth quarter of this year. The bad news is that INQ has yet to ink a deal with any North American carriers, so it might be a while before you actually have an opportunity to buy and use them.