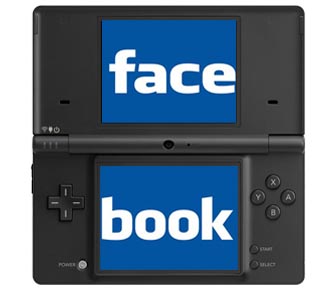 You know how the iPod touch is supposed to be so much more than a mere media player? The same thing can be said about the Nintendo DSi, apparently, because Nintendo doesn’t want it to be “just” a portable gaming console. That’s why the big N has just launched some heavy Facebook integration into its camera-equipped handheld.

This move toward Facebook was originally announced during the E3 press conference earlier this year and it gives gamers Nintendo DSi owners the ability to upload pictures directly to their Facebook accounts. After all, this dual-screened wonder comes with a pair of cameras.

It won’t be able to replace your iPhone or your BlackBerry any time soon, but little applications like this for the DSi could help it better compete against what smartphones can do for users. It won’t be long before we see some custom Twitter and mobile web integration, I imagine.

The cool thing is that you can not only upload regular photos taken using the DSi to Facebook, but you can also upload pictures that have been manipulated using the handheld’s built-in software. You’ve surely seen the commercials for the face-squishing and face-stretching.

I wonder if Microsoft will be pushing the envelope further when it integrates Facebook and Twitter into the Xbox 360 dashboard later this year.