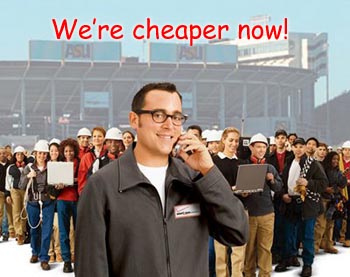 While there are some signs that the economy might be turning itself around, many people are still struggling with the current financial situation. Verizon is apparently offering some recession relief by dropping the price on “almost all existing smartphones” to under $99. That sounds like a deal to me.

If you’re looking to save a few bucks and have a hankering for a new smartphone, it seems that Verizon could have the ticket. For starters, the price for the Windows Mobile-powered HTC Touch Pro has been dropped to a mere $99 from its old price of $419. You get a touchscreen, camera, and slide-out QWERTY keyboard.

Even the touchscreen-equipped BlackBerry Storm is hitting up the sub-$100 price point, along with just about every other smartphone in the lineup. Checking the site, you’ll find that only two smartphones are being priced at more than $99 with a qualifying two-year service agreement: the recently launched BlackBerry Tour and Samsung Saga. Everything else is under $99.

So, what’s up with all this price slashing on smartphones? Part of it may have to do with the fact that you can get your hands on an iPhone 3G with contract for $99, so maybe Verizon wanted to entice some potential iPhone owners away from AT&T. The other factor could be the pending release of some new smartphones that these old clunkers will be replacing. The aforementioned Touch Pro, for example, will soon get ousted for the Touch Pro2.