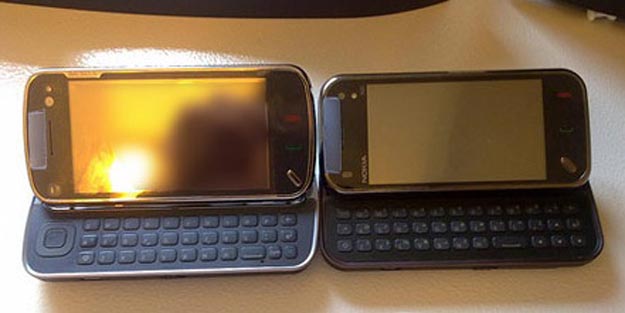 Even before it was officially released, the Nokia N97 was widely applauded as being a superphone, boasting features that set it at the top of the smartphone range. However, it did suffer from a bulk problem… that Nokia knew about.

At least, that’s what this leaked photograph leads us to believe. On the left side is the regular Nokia N97 that is already available for purchase through Nokia flagship stores. On the right is what we’re calling a “mini” Nokia N97, taking on much the same form factor and, presumably, the same kinds of features.

It still gets an angled touchscreen display, but the screen is clearly a bit smaller than its bigger full-sized N97 cousin. You’ll also notice a very important difference on the QWERTY keyboard. This mini-smartphone, which is beign dubbed the N00, lacks the directional pad that’s on the N97. It also only has 8GB of internal memory.

Did Nokia develop this smaller variant in tandem with the N97 or is this a completely new development that the Finnish phonemaker will be announcing in the weeks and months to come? Or is this a phone that will remain little more than a concept and a rumor?