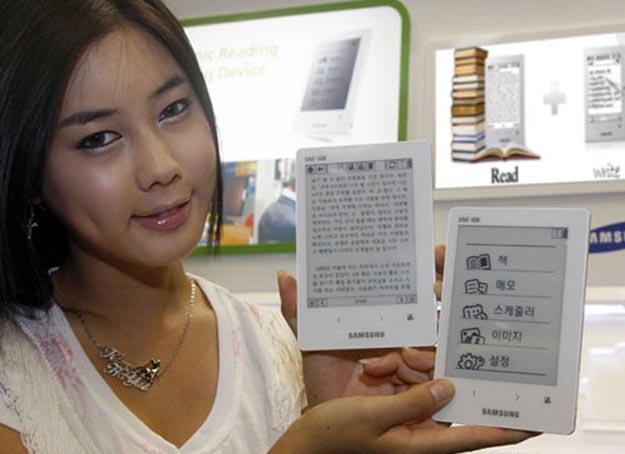 Getting ready for an official foray into the world of e-readers is Samsung. The Korean company has slightly altered the product we once knew as the Samsung Papyrus and announced it as the new Samsung SNE-50K. Personally, I like the personality of the Papyrus name better than the generic collection of letters and numbers.

For the Samsung SNE-50K e-book reader, you get a similar e-ink display as the Kindle, but there are several notable differences. For starters, the screen on the Samsung is only five-inches, compared to the standard six-inches you get with the regular Kindle. The SNE-50K comes with 512MB of internal memory.

Perhaps more notably, the Samsung SNE-50K e-book reader lacks any wireless connectivity whatsoever. It won’t do cellular broadband or even Wi-Fi. Instead, the only way that you can load content onto the e-reader is to connect it with a USB cable to your computer.

For the time being, Samsung plans on releasing its first e-book reader as a Korea-only product. There are plans to expand into international markets, however, and they may have a worldwide-ready prototype for CES 2010 next January.