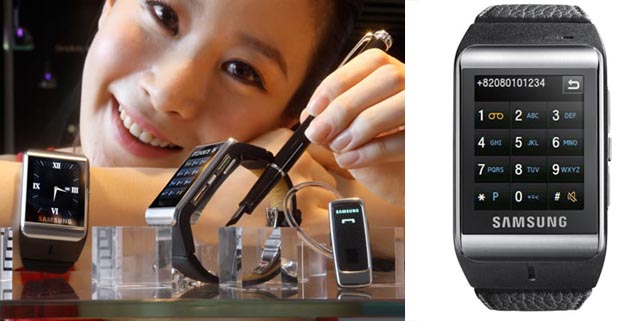 For everyone looking to have the James Bond experience with their cell phones, you’re about to be provided with a new Korean option. The LG GD910 watch phone isn’t the only kid on the block anymore, because we’re looking at the all-new Samsung S9110 Watch Phone. Further still, they’re saying that this is the slimmest watch phone to date.

The Samsung S9110 measures just 11.98mm in thickness, whereas the LG counterpart is a size or two chubbier with 13.9mm of thickness. In slimming down, however, Samsung had to make some sacrifices in other departments. For starters, the LG phone does quad-band GSM with HSDPA support, whereas the Samsung Watch Phone is only a dual-band GSM (900/1800) with nary of a mention of 3G.

That’s no the only downside to the Samsung S9110 either. This Watch Phone lacks the camera foiund on the LG alternative, and the Samsung phone only has 40MB of internal memory compared to the 2GB in the LG. Despite being thinner, the Samsung offering is slightly heavier (91g vs. 84g) too.

There are two very notable advantages for the Samsung S9110, however, above and beyond the added thinnness. The Samsung has a slightly larger (1.76″ vs. 1.43″) capacitive touchscreen and it happens to be cheaper. The LG watch phone is rumored to be north of $1000, but the Samsung S9110 should retail for about $640 when it hits French shelves by the end of the month.