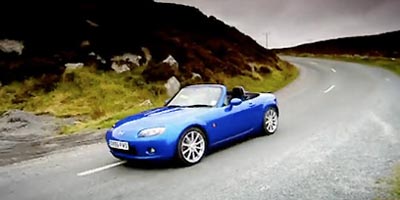 Even though I find myself on this side of the pond, I’ve always been a pretty big fan of Top Gear. It’s a great show that not only shows off some of the hottest cars in the world, but they do so in a very entertaining manner. For instance, we get to see the new MX-5 but in a completely different light.

Richard Hammond takes the Mazda MX-5, which some of us still know simply as the Miata, around for a test drive and he’s very pleased with the 50-50 weight distribution and the impeccable handling capabilities.

To better put it through its paces, Hammond decides to use the MX-5 to race another track star. No, he’s not racing another car. Instead, in the video clip below, you’ll watch as the Mazda MX-5 roadster is pitted against a greyhound and I don’t mean the tour bus. We’re talking canine.

They take the sports car to the home turf of the racing greyhound, complete with the dirt track. You would think that when you have one dog with one dog-power racing against a car with plenty more horsepower that it would be a very one-sided competition.

The result may surprise you.