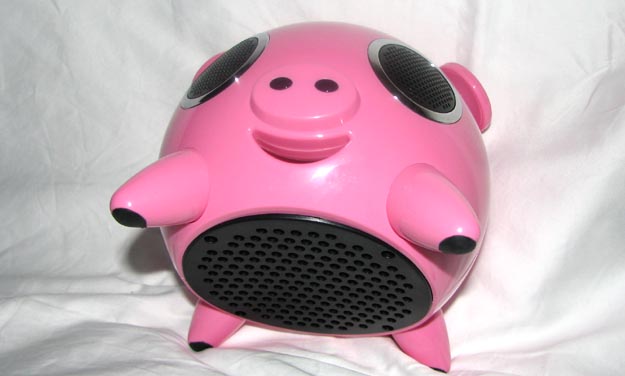 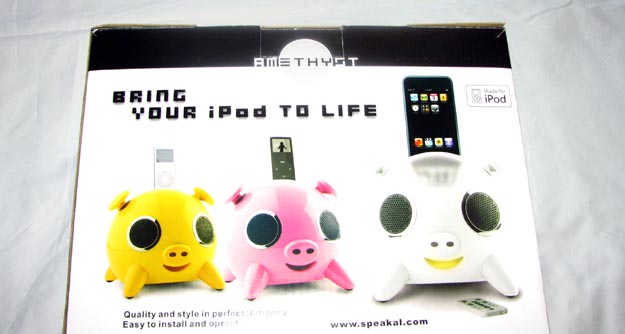 Don’t let its cute appearance fool you into thinking that it’s just some cheap toy for people who don’t care about how anything sounds. The iPig iPod speaker system from Speakal comes with a strong pedigree and it is perfectly capable of handling the entirety of your music collection.

Do you remember the iBoo iPod speaker dock that I reviewed a few short months ago? The iPig takes on much the same philosophy, except the Pac-Man inspired theme has gone hog wild, so to speak, tossing in a subwoofer and four stereo speakers to boot. 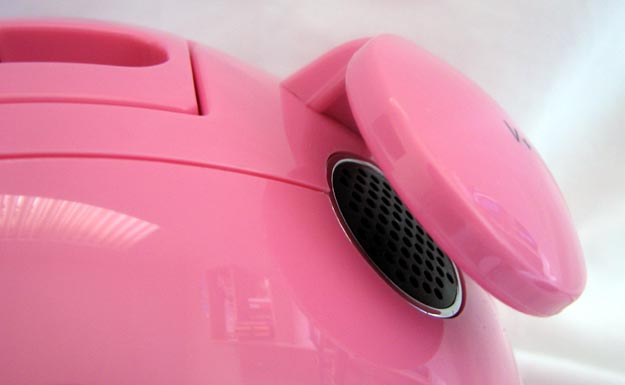 For the four speakers, we turn to the two eyes in the front, but underneath the ears is another pair of speakers. That’s a clever way to “hide” them while allowing the sound to still penetrate out into the environment.

The mostly spherical design of the iPig, along with the placement of the four speakers and the elevated position of the subwoofer, is meant to provide us with 360 degrees of sound. It’ll dock all contemporary iPods and iPhones, but there’s also a 3.5mm auxiliary jack in the back for game systems, TVs, other MP3 players, laptops, and so on.

Looking inside the box, you’ll get everything that you’ll need to get started with a tune-filled summer. Aside from the iPig speaker system itself, you get the power brick, power cable, a series of iPod adapters, and an instruction manual. Not pictured but also included is a remote control. 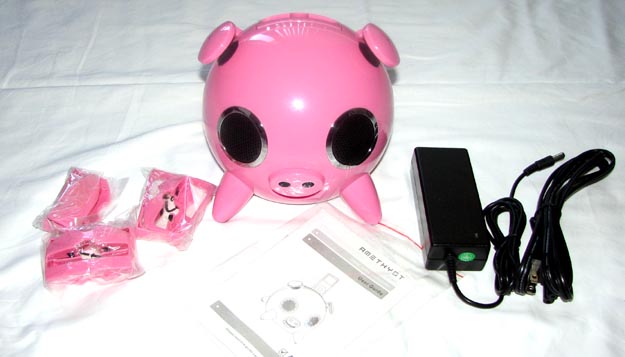 The credit card-style remote is very similar to the one we saw with the iBoo, but it comes with a few extra buttons. There are two buttons for switching between the iPod and auxiliary feeds, another pair to adjust the bass, and another pair to handle the treble.

As before, you also get a set of buttons to control the iPod’s menu. This is so much more than going forward and back in tracks, because you can actually make your way through the menu for playlists and such without having to actually touch your docked iPod.

Peeking in the Back 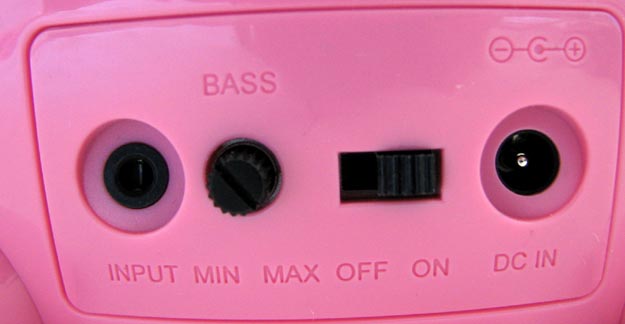 The iPig is a little more expensive than the iBoo and it comes with a suitable level of upgrades as well. Rather than hiding the power switch on the bottom, the iPig places it in the back where it can be more easily accessed. There’s also the 3.5mm input jack, the bass dial, and the port for the power brick. It does take an external power supply, so the iPig isn’t quite as streamlined as its iBoo cousin.

I find it a little curious that the iBoo has a bass dial along with the controls on the remote, since the dial has a definite minimum and maximum.

Remember how I said that you shouldn’t underestimate the performance of the iBoo? While the subwoofer doesn’t offer the same level of impressive bass as the mStation 2.1 Stereo Orb, I thought the overall sound output was very impressive for a speaker system of this size.

In going through some songs with heavier bass content, like “Stronger” by Kanye West, the speakers seem to get overwhelmed and there is noticeable distortion. Handling other songs, like “Disarm” by The Smashing Pumpkins, appears to be just fine. The speakers are loud, clear, and crisp.

With most speaker systems of this kind, the 3.5mm auxiliary input oftentimes leaves much to be desired. I am glad to report that the sound quality from this input is almost as good as the direct iPod input via the dock. That’s a definite plus.

It is unfortunate that the only on-board controls for the iBoo are for volume control (on the ears), without any touch-sensitive controls for switching tracks or play/pause. You need the remote for that.

Speakal has done a pretty good job with the iPig speaker dock for the iPod. The cute appearance and range of colors will make it a great complement to the bedroom of a child or even a teenager, though it may not be quite as appropriate for a grown-up’s home. That’s debatable and largely a matter of personal preference.

You do have to realize that you get what you pay for when it comes to speaker systems like this. The cheaper sub-$50 iPod docks aren’t much better than clock radios, but this $100+ iPig is just as good as many bookshelf stereos. The distortion with heavier bass is disappointing, but the overall sound quality and output level is impressive.

Where to Buy (and Coupon Code!)

The iPig, along with other Speakal iPod speaker docks, is available in Canada now via The Source. This is their first foray into Canada.

For our neighbors to the south, a better deal can be had through the Speakal online store. They’re currently offering free ground shipping in the USA and we have a special discount code for 20% off any purchase, including the iPig and iBoo. Enter mobilemag20off in the coupon area to get 20% off.