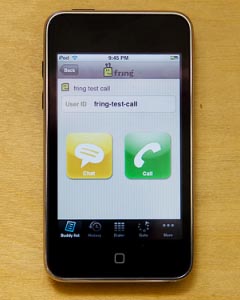 I used to tell people that the iPod touch was really just an iPhone in disguise. If Apple were to include the phone part of the equation and integrate a camera in the back, the iPod touch and iPhone would be virtually indistinguishable. It seems that someone in Cupertino was paying attention.

This could very well cannibalize some sales and make for even further confusion in the marketplace, but there are rumors saying that a new Apple iPod touch is in the works and it’s going to be more iPhone-like than ever.

Based on these rumblings on the Internet, the new iPod touch will still lack the cellular radio required to make it into a cell phone, but Apple may include a microphone and a camera. Why would you need a microphone? Because the iTouch would be connected to a Skype account.

In this way, the new version of the iPod touch won’t be quite a cell phone, but it could be a viable replacement for a home phone using the Skype VoIP phone service. A source is saying that there are factories in China that are already making iPod touch models with mics and cameras. Apple, of course, refuses to comment.

Interestingly, this could also represent the first Verizon iPhone. How? Take the new mic-equipped iPod touch and connect it via Wi-Fi to a Verizon MiFi personal hotspot creator. Not official, but somewhat viable.