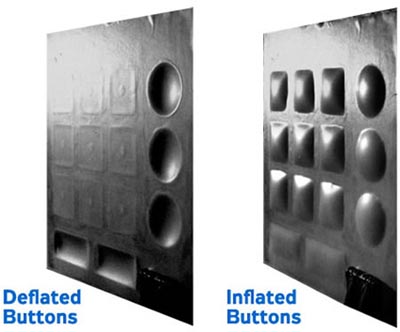 One of the main reasons why some people don’t like touchscreens is that they lack the physical feedback that you would get from a regular set of buttons. At the same time, touchscreens can be a lot more versatile than hardware buttons? This new CMU touch screen technology appears to address both of these concerns.

The idea is that the screen can be filled with “inflatable” buttons. When not in use, you get a flush touchscreen like how you always would. When you do want them, however, you can flip the switch and the buttons will fill up to take on the appearance of hardware buttons.

The researchers at Carnegie Mellon University are slowly working on this tech that will surely innovate the industry. We also hear that the surface will be made of latex so that it can expand and deflate at will, while providing a comfortable surface for human touch. I hear your snickering.