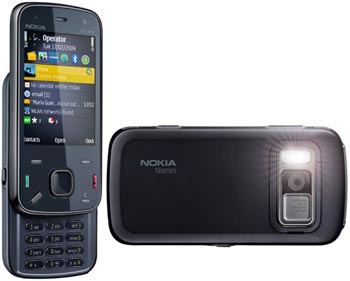 Might I interest you in a sliding smartphone that just so happens to rock an impressive eight-megapixel camera to boot? It may have taken a little longer than expected, but the Nokia N86 is finally making its way to the Nokia USA site, as well as making itself known at Flagship Stores.

This is the first 8MP camera phone from Nokia and it should be available in the United States “within the next few weeks.” Regarding the camera, you get a shutter speed of up to 1/1000 of a second, an F-stop range of 2.4 to 4.8, and a wide-angle lens for shots that are a little closer to home.

Outside of the photog-happy features, the Nokia N86 also gets a slide-out numeric keypad, S60 3rd Edition FP2, 2.6-inch AMOLED QVGA display, quad-band GSM, tri-band UMTS, 8GB internal memory, Wi-Fi, and aGPS. The UMTS side of the equation appears to be AT&T-friendly as well.

If you were to find the Nokia N86 overseas, you’d likely find that it is retailing at around the 375 Euro range. At the time it was announced, the exchange rate would have placed it at US$474, but today’s exchange bumps that to US$530. Unfortunately, you’ll be paying neither of those prices.

I guess Nokia is anticipating the exchange rate to continue heading the way it is, because the Nokia USA price for the unlocked N86 is $558. Not cheap, but this is top shelf goodness.