The touchscreen phone market has certainly exploded in the last couple of years and everyone is trying to come up with some new, exciting, and innovative. We like widescreens, I guess, so LG took it to a whole new level with the upcoming LG BL40. This is the widest touchscreen we’ve seen to date.

As with so many other phones of this kind, the LG BL40 does not come with a physical keyboard at all, relying instead on its large 4-inch touchscreen display. It may look like a glorified universal remote, but the 21:9 aspect ratio touchscreen gives you plenty of vertical space in portrait mode and even more horizontal space in landscape mode. It’s almost like the Samsung P3 MP3 player, no?

Aside from the uniquely long frame and svelte black casing, the LG BL40 also gets 335MB of internal memory, microSD expansion slot, and some sort of camera on the back. I have a feeling that it’ll launch initially in Korea, but your guess is as good as mine.

Also leaked alongside the LG BL40 is the latest addition to the Chocolate Phone lineup from LG. The LG BL42 is a vertical slider with touch-sensitive controls, a slide-out numeric keypad, and a 5 megapixel camera. 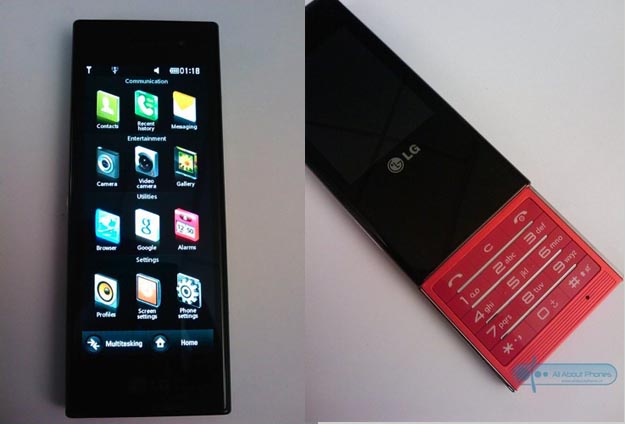