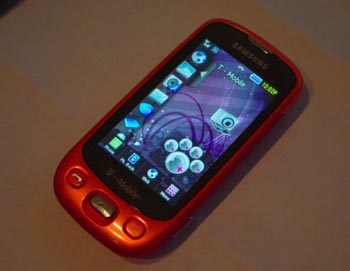 At first glance, you may almost be inclined to believe that you’re looking at the HTC Magic or My Touch 3G, but you couldn’t be further from the truth. You’re still sticking around with T-Mobile, but the phone you see here is the Samsung Highlight.

Although it takes on the appearance of a smartphone, the Highlight is actually a “dumbphone” that comes loaded with some rather basic features. The idea, presumably, is to get the touchscreen experience without having to dabble in smartphone complexities and expensive data plans.

You get a 1.61 x 2.64-inch capacitive touchscreen display, a few hardware buttons, a 3 megapixel camera with video, a microSD slot (under the battery), and that TouchWiz UI from Samsung for quick access to Facebook, weather, and so on. It’s almost like a smartphone, but not really. The widgets could be nice.

The Samsung Highlight comes in your choice of two colors. You can take the red “Fire” as pictured here or there is also a black “Ice” color. Black ice. Strange.

Look for the Highlight to hit T-Mobile later this month for $150 with contract.