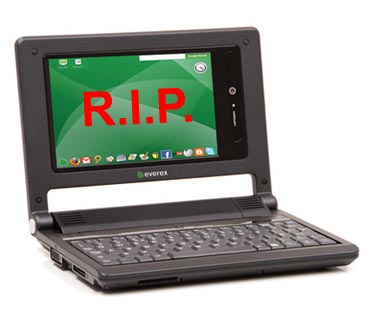 It was the year of the netbook and we experienced a lot of flux over the course of 2008. Everyone was slowly making their way into the market for little laptops and Everex was the little company that could. The Cloudbook was unlike anything else on the market.

And that may have been its greatest pitfall. Whereas the crew from Asus, Acer, HP, Dell, and so on all decided to offer Windows at some point, Everex stuck to its guns for the CloudBook using gOS Linux distribution, based on Ubuntu. They also stuck with the VIA processor.

Well, things haven’t always been all too cheerful for the Everex CloudBook and now it has finally kicked the bucket. Bought the farm. Surfing the big world wide web in the sky. Everex made a very tiny yet straightforward announcement on its website: “Everex US is now closed.”

I guess we never really expected big things from Everex, since the CloudBook didn’t get the best of reviews and the distribution channels didn’t quite pan out the way that they had hoped. Will other small netbook makers face a similar fate? Time will tell.