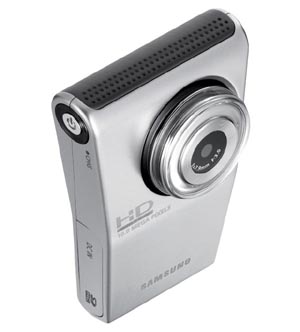 The Flip Ultra and Flip Mino pocket camcorders from Pure Digital have been a real hit with folks who want an easy way to record videos. Their success has spawned a number of direct competitors, like the Creative Vado, and now we’re adding another name to the mix with the Samsung HMX-U10.

Much like other similar offerings, such as the RCA Small Wonder and Kodak Zi6, the Samsung HMX-U10 takes on a vertical configuration and can record precious video memories with the touch of a single button. It’s supposed to be as easy and straightforward as possible.

You’ll notice the prominent HD branding on this particular device. That’s because the HMX-U10 is capable of shooting video at an impressive 1920 x 1080 high-defintion resolution, outdoing the 720p that you get with something like the Flip UltraHD.

Other features on this pocket camcorder include a two-inch LCD, USB 2.0 connector, direct YouTube uploading, a seven-degree angled grip, and built-in video editing software for footage edits on the fly. No need for a computer.

Look for the Samsung HMX-U10 HD pocket camcorder to hit retailers this Septemeber with an MSRP of $199.