If you’ve ever taken a look inside of a police car, you’ll probably see that they have a professional laptop mount in the dashboard. This way, they can use that ToughBook laptop without having to balance the thing on their laps. Well, one guy wanted to have the same experience, so he went and built a laptop tray of his own.

But isn’t it incredibly dangerous to use your notebook computer while barreling down the highway? Yes, indeed it is, but customizer Michael Davis is quick to point out that he doesn’t use it while driving. He only uses it while stopped.

With that out of the way, how did Davis go about constructing his own laptop/notebook tray for his Toyota Tacoma pickup truck? Well, there just so happens to be a convenient cup holder in the center console, so he outfitted a series of PVC pipes into that spot, mounting a tray on top for his laptop.

Armed with 2-inch PVC pipe, 1/4-inch thick plywood, and a little ingenuity, a very effective notebook tray was constructed. He even cut a hole in the plywood for the laptop cooling fan. This vastly improves airflow and helps to dissipate the heat. Nice idea, Mike!

The total cost of the project, not including the price for his own labour, came to just $31.28. Check out the source link below for a full step-by-step tutorial, including photos along the way. 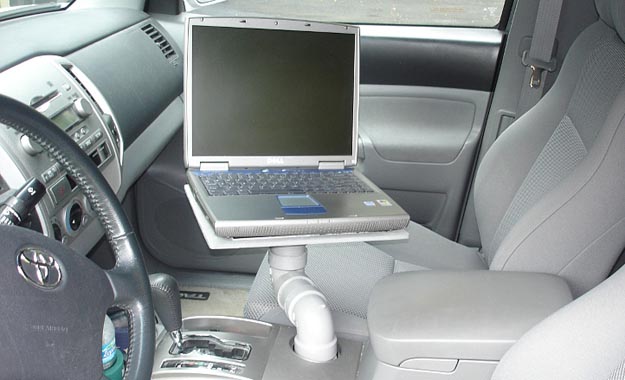