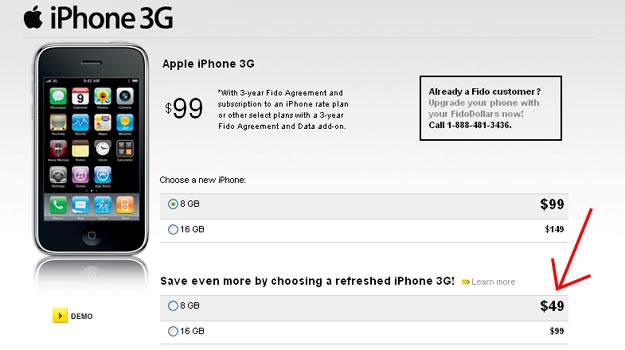 Joining the iPhone revolution just got a little bit cheaper. To get the newest iPhone 3GS, you have to spend at least $199 and that still requires a three-year contract. What if I told you that Fido is just as happy to sell you an iPhone for $49? Interested? Keep reading.

First, you won’t be getting an iPhone 3G S. If you must have that digital compass and the faster processing speed, you’ll still need to fork over some money to get the latest. Instead, Fido has the older iPhone 3G on sale instead.

Second, you won’t be getting a brand new phone. Instead, Fido is trying to dish out what it calls a “refreshed” iPhone. This basically means that it has been refurbished, likely having gone through some kind of warranty repair. It’s also very possible that these phones were simply customer returns; Fido has that 15-day return policy, after all.

In order to get the $49 “refreshed” iPHone 3G 8GB, you’ll still need a three-year agreement and a data plan. For the cheaper price, you lose the appeal of having somethign brand new, you don’t get earphones, and you may have some light scratches. Thankfully, you get six months of warranty still.