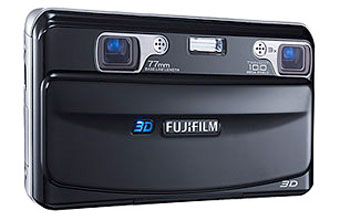 I’ve oftentimes wonderwed what would be the next major feature to show up in consumer-level point-and-shoot digital cameras. We’ve already seen things like face and smile recognition, HD video recording, and integrated geotagging. Now, Fuji is going beyond the second dimension with a 3D digital camera.

The appropriately named Fuji FinePix Real 3D is equipped with a pair of lenses and image sensors, as you can see in the picture provided, allowing you to shoot three-dimensional photos. Talk about really getting your pictures to fly off the page (or screen)!

Of course, there are a couple of caveats to consider. Not just any old monitor is going to be able to show off your new digital pictures in full 3D. Likewise, you’ll need some special equipment if you want to experience the 3D pictures elsewhere.

They’ll be offering a set of special plastic-lens-coated 3D prints and an eight-inch 3D-enabled photo frame. Pricing wasn’t announced for those two products, but I’m thinking that they won’t be very cheap at all.

Regarding the Fuji FinePix Real 3D camera itself, you can also use it to shoot regular 10 megapixel (2D) stills if you’re not in the mood for 3D goodness. Look for it to launch this September for $600.