You want the smaller footprint and larger display that can be afforded by phones like the iPhone and HTC Touch Diamond, but you miss the availability of a physical keyboard. Many handsets overcome this with slide-out keyboards, but Samsung is taking a wholly different approach if this patent is to be believed.

It’s almost like this unnamed phone wants to fly away, because it sprouts a pair of wings when you want to get the feel of a real keyboard. I’m guessing that this handheld device may use a spring-loaded mechanism to release the “wings” that form the two halves of the keyboard.

The patent application, referring to a Mobile Terminal Having Rear Keypad, adds in a reference to having a large touchscreen display. This is certainly one of the more interesting ways to approach the messaging phone market. The idea can be modified to suit mobile gaming too.

Since it’s just a patent filing, there’s no saying when (or if) Samsung will ever bring this kind of device to fruition. I guess we’ll just stick with sliding keyboards in the meantime. 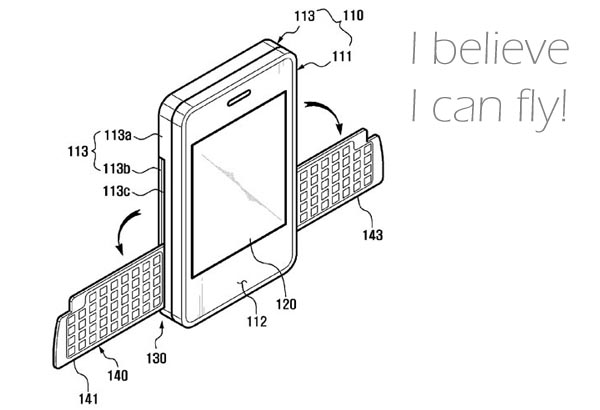