I didn’t think that Twitter was all that big of a deal when I signed up early last year, but now my online experience just isn’t complete without the microblogging interaction. For the time being, I’m using TinyTwitter on my Nokia E71, but it seems that owners of BlackBerry and Android devices will soon have yet another option for a mobile Twitter client.

Both the Android and BlackBerry platforms already have several Twitter apps for you to consider, but I have to admit that Tweeteev has to be one of the more visually appealing options out there. The user interface is simply gorgeous, but what about the functionality?

With Tweeteev, you’ll obviously be able to do basics like send out tweets, direct messages, and replies, but you also get some more advanced features like watching trends, using searches, and supporting multiple accounts.

Going further, the developers say that they’l have even more advanced features available in Tweeteev by the time it is ready to hit the BlackBerry App World and the Android Market, respectively. Pricing has not yet been announced, but they say that it will be “really affordable.” 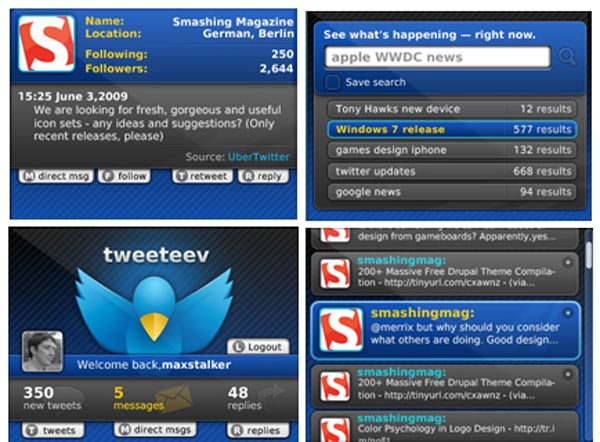