In many ways, one of the biggest appeals to the Apple iPhone is the incredibly robust App Store. It seems that Rogers wants to give another platform a bit of a push, so the Canadian provider has launched a new Best App Contest for Google Android. The kicker is that you don’t need to know how to code anything.

Instead, the Best App Contest for this “Revolutionary” smartphone platform only requires that you submit your idea for what would be a good Android application. I’m thinking that we don’t need another Twitter client or tip calculator, so you’ll need to be pretty creative.

Over the course of the next five weeks, Rogers is asking Canadians to submit their ideas for an app to be included in the Android Market. Every week, Rogers will draw a name to win a new HTC Magic or HTC Dream smartphone, either of which is worth about $600 (without contract).

Week one started yesterday and runs until 9:59:59 on July 13th. Week two runs until July 20th, week three to July 27th, week four to August 3rd, and Week five to August 10th. There are going to be five winners in all, as you can probably surmise.

To participate, you’ll need to install the Facebook app to your Facebook account. From there, you can submit an audio clip (up to 30 seconds) or write a short post (up to 140 characters) to describe your Android app idea. 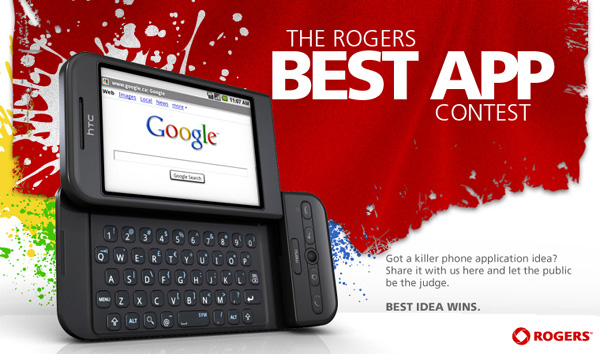