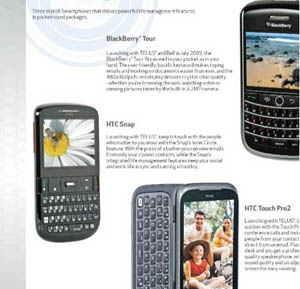 Best Buy has a habit of leaking information before the Canadian wireless carriers have an opportunity to make a formal announcement. The popular electronics retailer is continuing with that habit by telling us about three smartphones that are “coming soon” to Telus Mobility.

We had already known that Telus would be getting the BlackBerry Tour, since the CDMA-fueled smartphone is already scheduled to make appearances with Verizon and Sprint to the south. The current word is pointing toward a July 15th release of the BlackBerry Tour 9630, most likely at a $200-ish with contract price.

The two other phones in the flyer, however, have not yet been officially revealed in any form by Telus. First, we have the HTC Snap, a bar-style QWERTY smartphone that will likely be running on Windows Mobile 6.1. It also has that “Inner Circle” feature to manage your closest contacts. We’re looking at a $450 price point sans contract.

At the bottom of the page is the HTC Touch Pro2, the phone that obviously follows up on the first HTC Touch Pro. It’ll once again have the slide-out QWERTY keyboard and a big touchscreen. A $550 without contract price is likely.