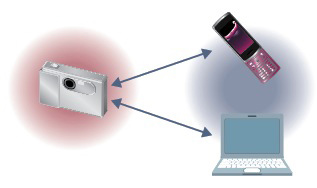 In chatting with one of my friends online the other day, he decried the lack of wireless sync for his iPhone. I told him about Google Sync for contacts and calendar, but he was more interested in a wireless way to sync his iTunes library. I thought there might have been some sort of Bluetooth workaround, but he said that BT would be way too slow. Maybe that will change very soon.

The Bluetooth Special Interest Group (SIG) is currently working on a new standard for Bluetooth that would effectively piggy-back or work with a WLAN (Wi-Fi) based connection. As it stands, you can only get a maximum speed of about 3Mbps. The new standard can bump that up to 24Mbps.

Dubbed Bluetooth 3.0 + High Speed (BT 3.0+HS), this is the next logical step beyond Bluetooth 2.0+EDR. The objective of this project is to improve interoperability between Bluetooth devices, but it’s the speed improvement that’ll capture your interest more than anything else.

In effect, WLAN will be added to the MAC layer, physical layer, and other layers of the existing model of Bluetooth. I still don’t think that it’ll be quite as speedy as a physically wired connection, but that’s a small price to pay for the convenience of wireless. 24Mbps sounds pretty good to me.