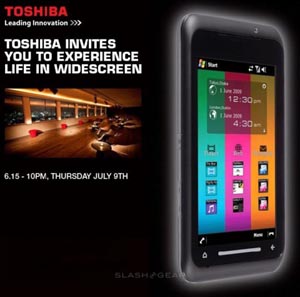 Around these parts, Toshiba probably isn’t the first name that comes to mind when you are considering a new smartphone. You’re much more likely to think about Apple, BlackBerry, or HTC perhaps. Even so, you may want to take a glimpse at the Toshiba TG01, since this phone comes with Snapdragon.

As you may or may not recall, the Qualcomm Snapdragon is supposed to bring about all sorts of speed and utility. After all, this phone is going to clock in at 1GHz, flying you through your apps, games, music player, email, and whatever else you choose to use your smartphone for.

Other notable features on the Toshiba TG01 smartphone, which will be officially unveiled next week in London, include 256MB of RAM, a 4.1-inch WVGA touchscreen display, GPS, Wi-Fi, 3G, and a 3.2 megapixel camera. All of this comes powered by Windows Mobile 6.1.

The official event from Toshiba is scheduled for Thursday, July 9th at 6:15pm London time. Pricing, release dates, and all that jazz will probably get announced at the event.