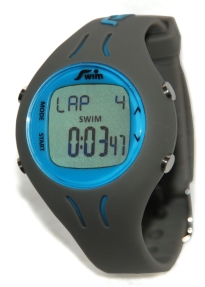 While I don’t think any of us will be able to compete with Michael Phelps any time soon, we should probably still do what we can to stay in shape. They say that swimming is one of the best exercises for you to do, but can you bothered with counting your laps on your own? I didn’t think so. That’s where this watch will help.

The Pool-Mate Watch may look like another one of those cheap $10 watches that you find at the kiosk in the mall, but it comes with a very special feature beyond simply telling time. Yes, it seems to have the usual timer and chronograph functions, but there’s one more feature specific to swimmers.

You see, like the iPhone, the Pool-Mate Watch has an integrated accelerometer. You would think that it would just detect the change in direction when you turn, but that’s not how it works. Instead, it detects the glide portion after each turn. That’s the part when you’re not actively going through strokes.

In this way, it probably won’t be the most useful of watches for the doggy-paddle, but it’ll be just fine for front crawl, back crawl, breaststroke, and butterfly. The battery lasts about a year.

The Pool-Mate Watch goes on sale next month for $114.