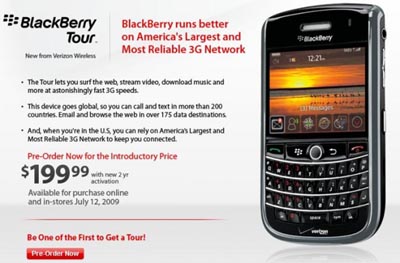 Listen up, CDMA fans, because you’ve got yourself quite the hot smartphone coming down your chute. We’ve been pining over the release of the BlackBerry Tour 9630 since the days we were calling it the Niagara, so it’s good to see that the new ‘Berry is finally going to see the official light of official day.

Let’s start with Alltel Wireless, since they seem to be the wireless carrier getting the short end of the stick a lot of the time when it comes to new phones. Well, Chad and his buddies can have the BlackBerry 9630 Tour too. There’s no mention of date, but a $199.99 with contract price sounds likely.

On the Verizon Wireless side of the equation, it seems that an official announcement and launch page have been erected to welcome the BlackBerry Tour. According to this page, VZW will start selling the new phone on July 12th at a $199.99 with 2-year contract price point. They also remind you that Verizon is America’s largest and most reliable 3G network. Is that a shot at AT&T?

The interesting thing is that Verizon is giving a good option for the corporate enterprise market, since the Tour 9630 will be made available with an optional camera. If you work some place where cameraphones are a no-no, that’s a definite plus.