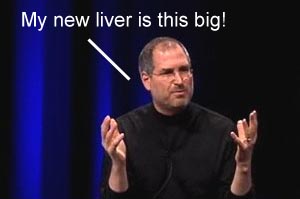 There were some rumblings last week that Steve Jobs was spotted at the Apple campus in Cupertino. Some people said that he was only there to shake a few hands and water a few plants. Well, he’s back and he’s back full-time. The one and only Steve Jobs is back on the job with Apple.

This comes after a six-month medical leave, during which the Apple head honcho reportedly got himself a liver transplant. Some say that iLiver 2.0 is faster, sleeker, and thinner than ever. And it comes in an aluminum unibody.

But I digress. In all seriousness, it’s good to see the iconic figure back on the job again. According to Apple spokesman Steve Dowling, Steve is “at Apple a few days a week and working from home the other days.” They are “glad to have him back.”

There have been many concerns of the health of Steve Jobs, 54, especially when you compare older pictures of him with what he looks like more recently. This leads to concerns over the future of Apple when Jobs leaves his post for good.

For now, we can welcome Jobs back to where he belongs. On the job.