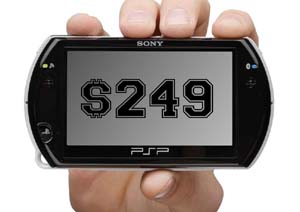 It’s debatable whether you think the new Sony PSPgo is expensive, because it costs about the same as something like an iPod touch or Nintendo Wii, but many people are not happy with the pricing point for Sony’s latest handheld. After all, it’s not a completely new PSP as much as it is a PSP 1.5 (not to be confused with the firmware edition).

So, why does the PSPgo cost what it does? Is it because Sony invested so much money into its research and development? Is it because they need that extra money to keep the digital download front of the PlayStation Store alive? No. None of these.

Andrew House, the head honcho at Sony Europe, says that it’s just because it’s shiny and new: “When you introduce a new piece of hardware you have the opportunity to say there is a certain premium that is associated with it, and we took that into account.”

In case you didn’t catch it the first couple of times around, the Sony PSPgo will be priced at $249 when it launches a little later this year. I guess they’re looking to recoup some of the shortfalls that came from the PS3.