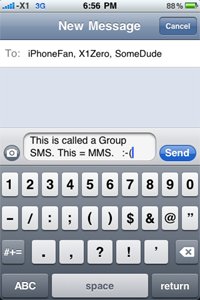 As with most other cell phones, you can use your iPhone to send a single text message to multiple recipients at the same time. This functionality has been built into the iPhone for some time, but it seems that Rogers and Fido have become a little creative when it comes to how they bill such transactions.

You would think that sending a single SMS text message to five friends would be charged as if you sent five individual text messages. That is not the case. As it turns out, a Group SMS or Group Text Message is actually being billed as MMS.

As you may already know, MMS is usually restricted to picture and video messaging, giving you the ability to share images taken from your camera phone and so on. The issue here is that Apple adds contact information, map locations and other small items to the MMS definition and these apply to group text messages.

If you signed up for one of those iPhone Value Packs with Rogers or Fido that includes a boatload of SMS and MMS messages, you don’t really have anything to worry about. You’ll want to double check that your Value Pack includes MMS if you send out any Group SMS though.

If you’re doing pay-per-use for that kind of thing, bear in mind that SMS is 15 cents each whereas MMS is 50 cents. Those charges can add up pretty quickly.