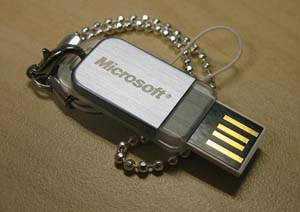 If tradition is any indication, then we should fully expect Microsoft to take the conventional route when it launches its new operating system later this year. It would only be expected for Windows 7 to be released as a DVD, but it seems that the guys in Redmond may offer an alternative too.

One of the reasons why Windows 7 is being so highly anticipated is that it is supposed to be much more friendly to the netbook market than Windows Vista. It’s not as resource-heavy, so Windows 7 is more appropriate for the comparatively weaker power of the little laptops. However, these netbooks typically don’t have optical drives.

In this way, it is very well possible that Microsoft will offer some versions of Windows 7 in the form of a pre-loaded USB flash drive. This way, existing owners of devices like the Eee PC and Dell Mini can do the OS upgrade without having to attach an external optical drive.

There’s no official word coming out of Redmond on this front, but I think it makes perfect sense for Microsoft to take this route. They could put in some protection on the data on the flash drive and, if the user opted to do so, they could format the drive and use it to store whatever they want.