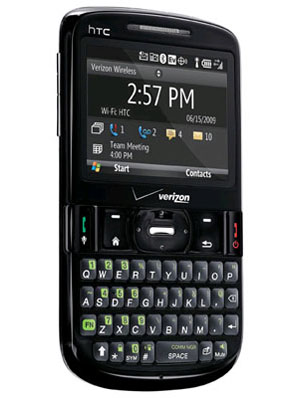 Are you thirsting for a new QWERTY-packing smartphone and don’t really know where to turn? All the Verizon Wireless subscribers in the audience can take note, because VZW has officially taken the wraps off of the new HTC Ozone, a Windows Mobile smartphone that’ll handle all of your basic work-related tasks on the cheap.

You really shouldn’t expect the world in terms of performance or specs though, because this the HTC Ozone isn’t really meant to be a higher-end device. It’s meant to introduce smartphones to the masses, not unlike what Palm did with the Centro many moons ago.

The reasonably slim and stylish HTC Ozone comes with an equally slim pricing scheme. Customers who decide to sign up for a new two-year service agreement can have the HTC Ozone for just $49.99 after a $70 mail-in rebate. The rebate, interestingly enough, will come as a debit card to be accepted whereever debit cards are accepted.