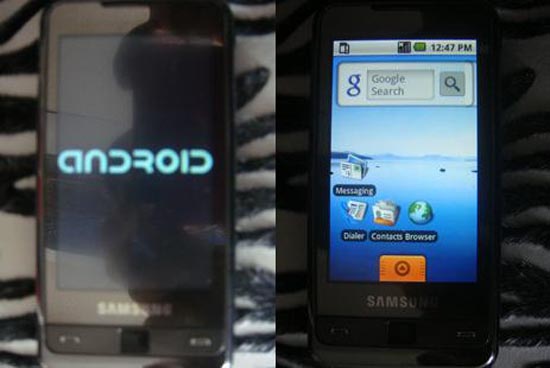 It looks like you don’t necessarily have to wait for new devices in order to get your hands on a “new” Google Android phone, because a few existing smartphones can now be loaded up with Google’s latest mobile platform. Just as we saw with the HTC Touch Diamond and Touch Pro, the Samsung Omnia i900 has also been equipped with Google Android.

Naturally, this is about as unofficial a solution as it’s going to get, but you can effectively port Google Android to the Samsung Omnia, introducing one of the first “commercially available” Samsung Android phones.

This comes by way of the MoDaCo forums and these screenshots act as proof. Just like the HTC Touch Diamond/Pro, the Samsung Omnia i900 was originally a Windows Mobile 6.1 smartphone. It has a 3.2-inch WQVGA touchscreen, 5 megapixel autofocus camera, Bluetooth, 3G, and Wi-Fi.

With the port of Google Android, the enthusiasts were able to transfer basic Android functionality to the Omnia, including basic touchscreen support. As with all of these kinds of hacks, however, not everything is peachy-keen.

You may be able to use the touchscreen, but there aren’t any drivers to support the camera or even the phone. The touchscreen can freeze sometimes and some of the hardware buttons don’t work. You’ll get streaky text and other glitches. Yes, it’s nowhere near ready, but this is a big step toward some Android-powered Samsung love. Sort of.