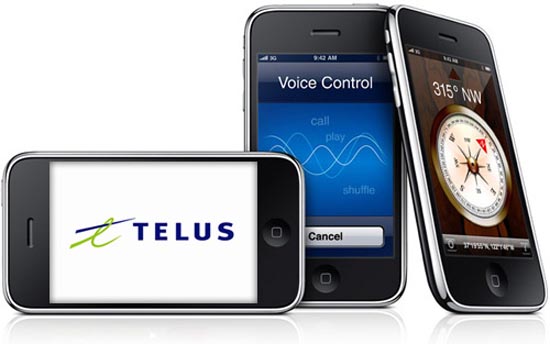 If the stars align and all the puzzle pieces fall into place, Canadians may have another option when it comes to buying Apple’s latest cell phones. As you may have already heard, Telus plans on entering the GSM/HSDPA arena starting this fall and this could usher in an era of Telus-sourced iPhones.

Competition will certainly be a good thing for the end consumer, because it could provide for more affordable price plans. As it stands, Rogers currently has a monopoly over the iPhone in Canada since you can only buy the iPhone through Rogers or the Fido, the latter of which is a Rogers subsidiary.

The Telus GSM/HSDPA network is currently being slated for a fall test run in the Vancouver area with a more complete rollout in time for the 2010 Winter Olympics in Vancouver and Whistler. Should this schedule hold up and if Telus found a way through the Rogers-iPhone exclusivity deal, we could be looking at a Telus iPhone as early as this October.

You’d definitely want to chalk this one up as mere rumor for the time being, especially since Telus is still a CDMA-only carrier for now, but the possibility is definitely there.