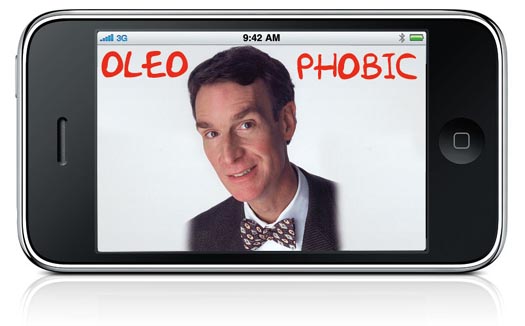 The iPhone 3G S may look exactly the same as the iPhone 3G before it, but it comes with a series of notable upgrades. You’ve got the faster processor, more RAM, a better camera, a digital compass, and something called an oleophobic screen. What the heck does that mean and why should you care? Who better to ask on this subject than Bill Nye the Science Guy?

The lucky kooks at Gizmodo hooked up with everyone’s favorite scientist to learn more about just what is an oleophobic screen, how it works, and why you should care. In short, the purpose of the oleophobic screen on the iPhone is that it becomes fingerprint resistant. You get fewer smudges from your greasy fingers and acne-infested face.

Oleophobic roughly translates as “afraid of oil.” In essence, the surface does not allow the oil from your fingers and face to cling to it, so that way, the fingerprints don’t show. The glass screen of the iPhone 3G S has been infused with a special organic polymer, by way of an intermediary substance, that is oleophobic.

In short, the screen on the iPhone 3GS is sort of like what happens when you’ve just applied Rain-X to your car’s windshield or a nice coat of wax to the car’s body. Water droplets bead up and slide away rather than sticking to the surface of the car. For the iPhone 3GS, your greasy fingerprints also bead up and do not bond to the surface of the screen.

Thanks, Bill, for clearing that up!