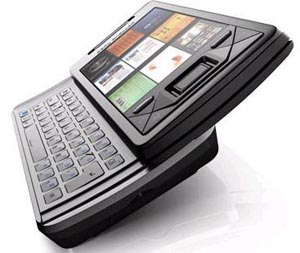 For people who dabble in unlocked and overseas phones, the Sony XPERIA X1 isn’t a terribly new phone anymore. The Windows Mobile 6.1-powered smartphone is the first WinMo phone from Sony Ericsson and it is produced by HTC of Taiwan. Well, if you’re Canadian and looking for a subsidy, you’ve found it.

It took them a little longer than we would have hoped, but Rogers Wireless in Canada has officially launched the Sony Ericsson XPERIA X1. As you may recall, this Windows Mobile smartphone comes with a 3.0-inch VGA touchscreen, a slide-out QWERTY keyboard, and that unique “Panels” overlay interface.

When it was first made available (at full retail) as an unlocked smartphone, it was quite the hot item. It was also quite pricey. However, we have seen the launches of the HTC Magic, Palm Pre, and iPhone 3G S since that time. In this way, the XPERIA isn’t exactly the hottest kid on the block anymore.

Assuming that you’ll agree to a qualifying Voice and Data plan with Rogers Wireless, you can nab the XPERIA X1 for just $249.99 on a three-year service agreement. This is a tad more than what you’d pay for either of the Android phones or the cheaper iPhone.
Alternatively, you can do two-year or one-year contracts to get the phone for $449.99 or $549.99, respectively. The outright purchase price is $599.99.