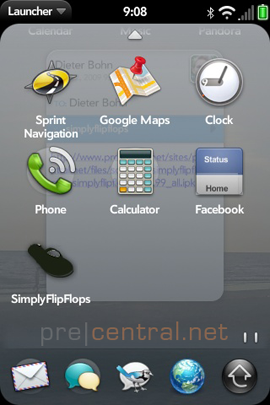 Going through to “root” your device wasn’t the hardest thing in the world, but it certainly wasn’t something that novices and beginners would want to do. The new method of installing early homebrew applications for the Palm Pre instead utilizes an email exploit. No rooting or hacking required.

Using this new method, the apps just have to be properly prepared and then they can be sent to your Pre via email. More specifically, a link to the .IPK file of the app can be received via email. Clicking on that link will install the app.

The preparation of the app for this purpose, however, isn’t quite so easy. The developer will need to spoof a legitimate software signature and do some other stuff. The wiki has instructions if you’re the developing type.

This “hack” has only been out for about a day, so no developer has come up with a real app to make use of the exploit just yet. The only one available is a dummy app called SimplyFlipFlops, which acts more as a proof of concept than anything else.