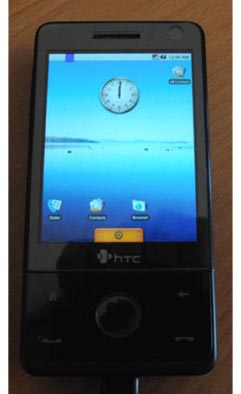 Many of us know that the T-Mobile G1 is also known as the HTC Dream G1. It’s also known simply as the Google Phone in some circles, because it was the first handset to be powered by the Google Android platform. Well, it seems that HTC’s other phones can do Android too.

The HTC Touch Diamond and HTC Touch Pro have apparently gone thorugh a few modifications by some Google enthusiasts. While they come loaded with Windows Mobile out of the factory, these phones can also run on Google Android.

From what I can gather, the latest Android OS ROM has been ported to the two devices and it runs just fine. You can use the Android OS to do basics like surfing the web, sending text messages, and so on, but there are many Linux drivers still missing.

In this way, you can’t use the integrated WiFi, Bluetooth or GPS. Further still, voice calls won’t even work, because they don’t have the drivers for the microphone or speaker yet. I’m sure the enthusiasts will cook up something eventually, but getting the OS to run is a quantum leap in that direction.