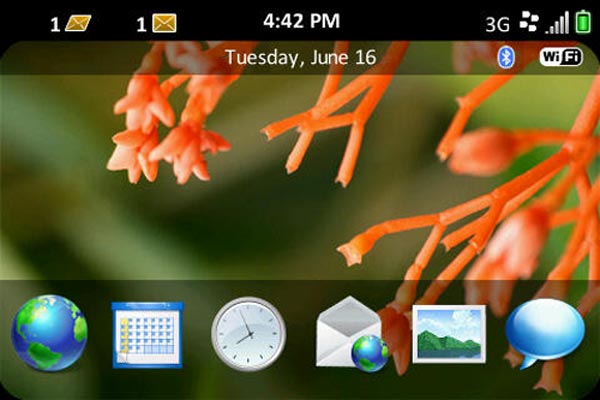 So, you’ve recently signed a new contract so that you could land a hot new BlackBerry Bold or BlackBerry Curve 8900. You’re very happy with BIS and the ability to communicate with your friends over BlackBerry Messenger, but now you find yourself yearning for the Palm Pre instead. What is a BlackBerry addict to do?

Well, Corey Visto has come to the rescue, sort of, by bringing a new theme to the BlackBerry platform that’s meant to mimic the look and feel of Sprint’s latest touchscreen and sliding QWERTY hotness. The appropriately named BB Pre theme creates a look on your BlackBerry that mirrors tha of the Palm Pre.

You can a small clean banner across teh top for basic stuff like battery life and signal strength, but it’s the dock on the bottom that’ll really give you the Pre appearance. The icons are so crisp and trendy! Totally dig it.

If you’ve got a Bold or a Curve 8900 and you want in on some Palm Pre-like action, head on over to ShopCrackBerry.com to find the BB Pre theme for seven bucks.