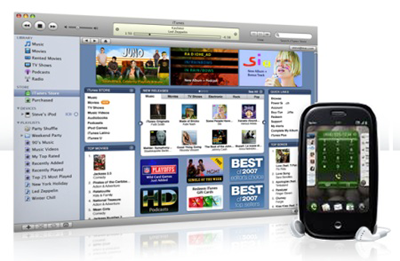 Perhaps one of the reasons you may be hesitant to abandon your Apple iPhone in favor for the upcoming Palm Pre smartphone is that you don’t want to give up on your iTunes synchronization ability. As it turns out, Palm will have you covered on that front right out of the box, because the Pre syncs with iTunes. No mess, no trouble.

Well, I guess that’s not completely true. If you have purchased any DRM-protected content from the iTunes Music Store, it won’t work on the Pre. Any of the non-DRM stuff you happen to have in your iTunes library, however, will be able to be pushed over to the new touchscreen and QWERTY-packing handset from Palm and Sprint.

The guys at Palm, as well as several other sources online, have now confirmed that the Palm Pre will sync seamlessly with Apple’s iTunes. Just plug the phone into your Mac and everything will do what it needs to do. This is in sharp contrast to earlier solutions where consumers would need to use some kind of third-party application for iTunes-synchronization on a Palm phone.

Is this an “unauthorized invasion” of Apple’s music store? Will the team in Cupertino take up issue with this, possibly getting the legal department to attack Palm while the development team works on an iTunes update that can block this non-Apple device from getting into iTunes? When asked, Apple took the usual route of saying that they do not respond to rumor and speculation.